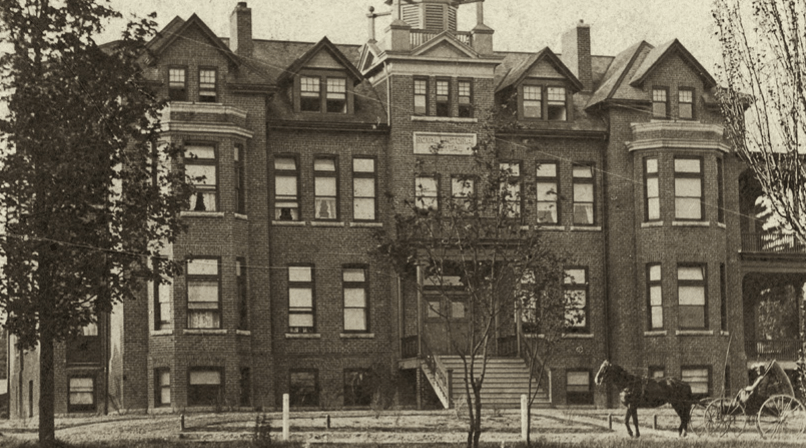 ​The Barrie General Hospital, a tiny cottage with just four beds, was opened on Duckworth Street near Ardagh’s Grove.

​A larger hospital (with room for 13 patients) was built on High Street. In recognition of Queen Victoria’s Jubilee, it was renamed Royal Victoria Hospital.

The first X-ray machine, with a water driven motor, was purchased by several members of the medical staff.

​After World War II, the population of Barrie soared, so the Memorial Wing was built with 70 beds. By the late 60s RVH had expanded to 315 beds.

​The new Royal Victoria Hospital opens, on-schedule and under budget.

​RVH gets the Green light for the Phase 1 Expansion Project including the Simcoe Muskoka Regional Cancer Centre which will double the size of the current hospital.

RVH breaks ground on Rotary Place which is home to Rotary House, the lodge for cancer patients

​RVH introduces a new visual identity and name, becoming the Royal Victoria Regional Health Centre, although it will also continue to be referred to by the well-known acronym “RVH”.

​RVH launches new strategic plan June 17, 2013. MY CARE puts patients and families at the centre of everything we do. Follow the link to the right to review the plan. The plan was refreshed in 2016 and 2018.

RVH gets the ‘green light’ from the provincial government to build an Advanced Cardiac Centre.

RVH gets approval to develop a Child and Youth Mental Health Program including an inpatient unit and Day Program.

​The health centre celebrates the opening of the Simcoe Muskoka Regional Child and Youth Mental Health Inpatient Unit in December.

RVH embarks on planning for the future of healthcare with its Plan our Future campaign to determine best use of remaining space at the Georgian Drive campus and to begin plans to build a south campus to meet the healthcare needs of residents in south Barrie/Innisfil.

With an unwavering focus on safety, RVH introduced hundreds of new practices and protocols, put screeners at every door, restricted visitors, delayed scheduled surgeries to maintain bed capacity and, essentially, went into lock-down.

We faced a global PPE shortage, opened additional beds, built a field hospital, and supported our long-term care partners as the virus ravaged their homes.

To keep our patients and communities safe during the pandemic, RVH: